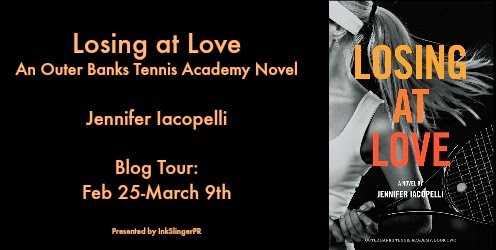 The Blog Tour for Jennifer Iacopelli's Losing at Love began since yesterday. This is the second book in Jennifer's Outer Banks Tennis Academy series, and I am so excited to be sharing
my review for tour with you!! If you missed out on all the fantastic release day info, and didn't enter Jennifer's giveaway, do so here!!

Grass courts, tennis whites and the fiercest competition in the world. Wimbledon. After two crazy weeks in Paris, the girls of the Outer Banks Tennis Academy are headed to London with just one thing on their minds: winning.

Indiana Gaffney is fresh off a surprise win at the French Open junior tournament. Sponsors are clamoring for her attention, but what she wants more than anything—aside from a wild card to Wimbledon—is to be with Jack Harrison, but international fame and a secret relationship rarely mix well.

When Penny Harrison dreamed of playing at Wimbledon she never imagined agonizing pain shooting through her ankle with every step. With just a month until the tournament and the whole world expecting her to win, she’s determined to play, with or without the support of her coach or the love of her life, Alex Russell.

For the first time ever, no one expects anything from Jasmine Randazzo. After a crushing first-round defeat in the French Open juniors, the tennis world has given up on her, but worse than that, so have her parents, her best friend Teddy and maybe even her coach. With everyone writing her off, can she find it within herself to go after her dreams?

I haven't read that many sporty books to really compare my experience. But with reading Jennifer Iacopelli's books I have to say it has been a good one.

I loved how this book had a perfect balance between all aspects such as sports, friendship and romance. I didn't feel like I didn't know Tennis, I am not that big of a fan. I cant for the love of me carry on a good game of badminton (even though I kind of love it xP). So, you don't have to worry about the fact that it's about tennis and not being able to understand. It will be easy to get those scenes. Those scenes were one of my favorite ones. ;)

Now this book had three narrators, Indy, Jasmine and Penny (just like book 1)-- I can't decide who my favorite girl is but I am leaning more towards Indy as some of her habits are similar to mine :p

This book was 2x everything book 1 was. I love how quick of a read this was. Never a dull moment. And I loved how real it was when there was a fallout between (I won't reveal them, you should read it to find out xP)

I liked book 1 but book 2 was definitely better and upped my interest for the series.

I would like to thank the publisher and Jennifer for this reviewing opportunity.

I caught up to the series this time around. You should, too.

Catch up on the series now with Game. Set. Match:

Jennifer Iacopelli was born in New York and has no plans to leave...ever. Growing up, she read everything she could get her hands on, but her favorite authors were Laura Ingalls Wilder, L.M. Montgomery and Frances Hodgson Burnett all of whom wrote about kick-ass girls before it was cool for girls to be kick-ass. She got a Bachelor's degree in Adolescence Education and English Literature quickly followed up by a Master's in Library Science, which lets her frolic all day with her books and computers, leaving plenty of time in the evenings to write and yell at the Yankees, Giants and her favorite tennis players through the TV.