I have a cover reveal for Stacey Kade's newest novel Bitter Pill. It is expected to hit shelves in October.

Let's see what the book's about first: 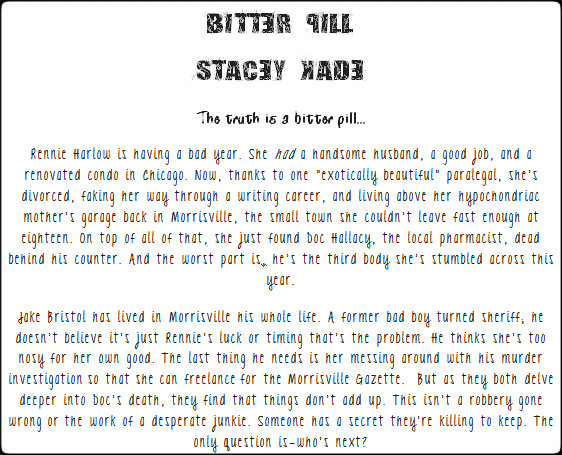 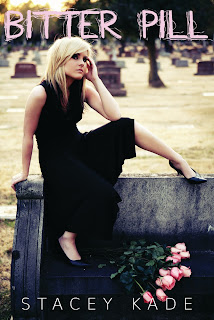 Time for the giveaway:

Up for grabs:
3-e-arcs,
$25 gift card to the e-retailer of the winner's choice,
annotated ARC of Bitter Pill

Here's what Stacey had to say about the book:

Thank you so much for participating in the reveal for Bitter Pill. I’m so excited to be able to share it with you guys! It is one of those incredibly rare books where it almost felt like it wrote itself, and I just had to keep up. Well, the first draft anyway! :DWhen I wrote this story, I was desperately homesick for the very tiny town where I lived in junior high. As some of you know, my dad is a Lutheran pastor, so we moved quite a bit during my childhood. For whatever reason, that small town in Southern Illinois really stuck with me. Morrisville is a (very) fictionalized version of that place.There’s an odd mix of intense gossip and deep reserve that seems inherent to small towns. It’s part of the culture—“We know everything about everybody, but we don’t talk about that.” Certain things were just not discussed, which makes small towns a prime environment for secrets. And secrets are at the heart of every mystery.So, when I sat down to write this story, that element of knowing someone well but not really knowing what they might be capable of intrigued me.Rennie Harlow is my grown-up version of Nancy Drew, I suppose. Except, unlike cool, calm and collected Nancy, Rennie’s life is a disaster. She’s trying to make it through a particularly rough patch, but she’s flailing and fumbling, and I can so relate to that.As for Sheriff Jake Bristol…well, what can I say, there’s something about an honorable man in a tough situation that’s pretty irresistible. :DThank you again for checking out Bitter Pill, and I hope you’ll give it a try!

Other books by Stacey Kade:


The Ghost and the Goth, Queen of the Dead, and Body & Soul, Hyperion Books, Available Now
http://www.staceykade.com
http://www.twitter.com/staceykade