August has ended. That means vacations have finally ended. My uni starts this Monday. Didn't want the vacations to end. But alas. I have to study. LOL. Remember how I had a TBR for last month with definite and may-be reads. Well, from that list I read the definite reads. So in a way I followed my TBR. Yay. Along with these, the rest were spontaneous reads along with the TBR I had set for Bout of Books 8.0. In total, I read 25 books. Before I forget I read two more books for July: The Forsaken and The Arrangement 3. Just to get it out of the way.
Good news, I am finally on track for my reading challenge. 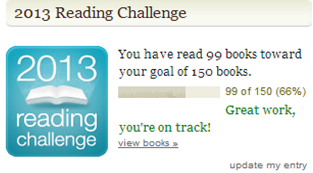 I dunno why the widget doesn't update the progress. Moving on.

Let's see what I read for the month.

The books that I really enjoyed reading for August were the Mythos Academy ones. (The link will take you to the thirs book in the series.)They are really fun and quick to read. They can be comapred to the Shadow Fall series. You don't outright love them but still you want them to be in your reading life. If you get what I am trying to say. Eheh. I gave Midnight Frost and Crimson Frost four stars each. Dark Frost and the two novella got 3 stars each.

Another set of books I really enjoyed reading were Meg Cabot's The Boy Next Door and Babe in Boyland. The former was set in an email format. This book was funny. I laughed a lot while reading it. The latter reminded me of She's The Man. This wasn't the only book that reminded me of She's The Man. I read The Academy as well that had the same theme- a girl dressed up as a guy in an all guy's academy. I enjoyed Babe in Boyland more than The Academy. I will be reviewing these titles together later on.  I gave 4 stars to the former titles. The Academy got a two star rating.

I finished two series this last month. The Wicked Lovely Series and The Revenants. I read the last books Darkest Mercy for the former this month and the remaining three books in the Revenant books. They got 4 stars each. I will review the former and the latter later on.

The books that got three stars each were many this time around. They just surprised me. With these titles it was a little difficult for me to really get into it. I would for a short while but then I would lose interest. They had good story lines if only they had worked for me. I flipped pages when I was reading these. They got three stars each.

I read three new adult titles: Frigid, Charade and Facade. Charade got four stars whereas Frigid and Facade got three stars each. I don't have much to say about these. I liked them while I was reading. They are stand-alone's each. All are from renowned authors. I have read YA works from both the authors. Y'know how I adore JLA but this new-adult title was a predictable one with a story-line we have seen numerous times. I didn't like the drama that Syd would sometimes throw our way. Kyler was also an okay male lead. I didn't like he was handling stuff. I don't remember if there was OTT use of endearment in this one. Read it may book ages ago.

Charade and Facade are companion novels but can be read individually as is the case with every companion novel out there. I liked the starting poems in Facade. There were some really cheesy lines in the book that made cringe. But some people will disagree saying it was beautiful. Anyway, these titles didn't really leave me hanging with an open mouth. They were just quick reads. I am not really dying to read the next ones but they are by authors I love and so I will read whatever they release next.

The above titles were just amazing. I absolutely fell in love with Just One Day. I hadn't even finished reading the first book- was procrastinaing with the last 10 pages or so and went ahead and read the excerpt for book 2. Hahah. I gave it four stars.
Origin was such a great addition to the Lux books. I just can't imagine what will happen next. I was surprised with this book. Origin obvi got a five star rating.
A Clash of Kings was awesome. I can't not give it five stars. I really love the TV show and these books are way to refresh the TV show and also find more deets that I missed in the show. >_<

I enjoyed Tiffany King's newest addition in the Daemon Hunter novels more than the first. This world was more darker with Jordyn being sassy with the demons that I enjoyed a lot. Check out my release day launch post and review. I gave it four stars.

The last book I read for August was Nicholas Sparks' The Rescue. I had forgotten that I had read this two years back or was it last year. Re-read it and liked it. I never thought I would re-read The Rescue. I would love to re-read The Message in a Bottle willingly but I don't think I would have ever re-read The Rescue. There's just something about Nicholas Sparks' books that no matter how much you adore them you don't want to revist them. Something about them being bittersweet. Or it might just be me. D: Gave it four stars.

These were the books that I spent my time with in August.
What books did you read in August?
Leave behind your wrap-up links. Would like to check 'em out.