Today, I am lucky enough to be a part of the Blurred cover reveal by our amazing author Tara Fuller. It is the sequel to Inbetween in the 'Kissed by Death' series.

Let's get the drum rolling for the cover now. Here it is: 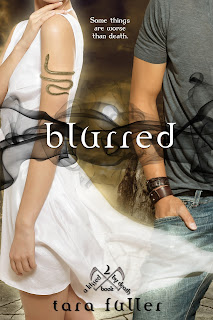 Blurred Blurb:
Cash is haunted by things. Hungry, hollow things. They only leave him alone when Anaya, Heaven’s beautiful reaper, is around. Cash has always been good with girls, but Anaya isn’t like the others. She’s dead. And with his deteriorating health, Cash might soon be as well.

Anaya never breaks the rules, but the night of the fire she recognized part of Cash’s soul—and doomed him to something worse than death. Cash’s soul now resides in an expired body, making him a shadow walker—a rare, coveted being that can walk between worlds. A being creatures of the underworld would do anything to get their hands on.

The lines between life and death are blurring, and Anaya and Cash find themselves falling helplessly over the edge. Trapped in a world where the living don’t belong, can Cash make it out alive?
Goodreads
Amazon
Barnes & Noble
The Book Depository

Ah, it's so pretty. I want to pick this up and just keep looking at it. Love the swirly effect behind the title. And I loved the author name and the series name at the bottom so much from the first book. Love Anaya's snake amulet/arm band. xP

A little something about the amazing author: 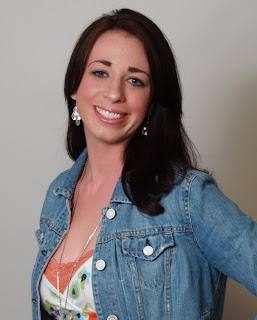 Tara Fuller writes novels. Some about grim reapers​. Some about witches. All of course are delightfully full of teen angst and kissing. Tara grew up in a one stop light town in Oklahoma where once upon a time she stayed up with a flash light reading RL Stine novels and only dreamed of becoming a writer. She has a slight obsession with music and a shameless addiction for zombie fiction, Mystery Science Theater, and black and white mochas. Tara no longer lives in a one stop light town. Now she lives with her family in a slightly larger town in North  Carolina where they have at least three stoplights.

She is also hosting a giveaway for the first ARC of Blurred when it becomes available. Let it be known that the ARC's aren't ready yet but when they are that winner will get the first one. ((:
So, if anybody is interested.

P.S. I have to pick up both these amzing books. The first book has been on my TBR for quite some time now. I will be picking them up together.

What did you think of the cover?
I adore it.
I love this cover more than the first. ^-^