Where I talk about the chapters I liked in the said book I finished reading. They can be 'somewhat' spoilerly so, don't read it if you don't want to know a single detail. (but I try not to reveal too much)

I read Beautiful Chaos just a day before and there were quite a few chapters that I liked either for their drama, angstness or bittersweet moments.

Things got more enjoyable when I was nearing 200 pages. The first chapter that I enjoyed had this particular scene with Ridley in her full siren-turned-mortal-angst.

What began this explosion and what followed this dialogue was good to read. Haha! Read the book to find out.

The next chapter that had me laughing or somewhat entertained was when the group went out to see movies. The convo that Ethan had with Lena about he invited a certain someone to a party. Also, how Link was reacting to Ridley's date. I don't have a quote but a telling of the after events.

The next scene that was soo enjoyable was at Savannah's party. I won't post the whole exchange because it was just soo good that yiou should read it for yoiurself to really enjoy it. I will post just what Ethan said.

Things got chaotic after this. The next chapter that I liked was when Ethan comprehended his role to reform the order. This particular scene happened between Link and Ethan and it is sweet recollection. They are such good friends. I love thier relationship. 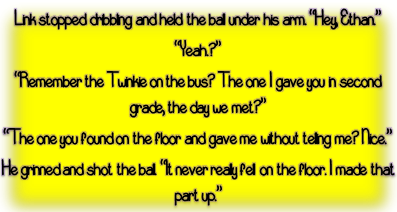 The next scene happened in the same chapter. It is a quote by Winston Churchill that Marion whispers to Ethan.

I loved the next chapter as well, but I believe you guys should read it for yourself as it was sad and sweet and written beautifully. I will post one quote by John Breed, though, that was kinda good.

To conclude I liked this book.