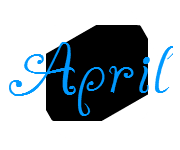 April has ended which means the time wrap up books read through the month.. Well, remeber the books I set out to read last month, if not, you can your memory by seeing this here. Well, I only got to read two books from that list. I did start reading B.Chaos but coudln't get into it. So, ditched it. The rest of the books were picked randomely. But as the aim for last month was to finish series and I managed to do that.

I began the month with Jennifer E. Smith's really sweet book This Is What Happy Looks Like. The Prologue had me hooked right form the start and I sat reading it until I finshed it. I gave it 4 stars.

I had to read The Deepest Cut for a GR group and I did. It got 3 stars. I quite liked it. I don't quite remember what I didn't like. Hmm. Sorry anout that. In some places it lacked the awesomeness that I want in a book to love it truly.

Well, I read Eternally Yours- the final book in The Immortal Beloved Trilogy. And I was quite happy with how the series ended. I really enjoyed this whole series. I don't remember if I have reviwed this or not. Prolly not. As I was really lagging behind in posting those reviews by procrastinating. I fear I am not a good reviwer or writer. Whatever. I should be more confident, I know. I shouldn't even be writing this here on this blog and rather be posting on my wordpress blog. :/ I am such a mess. Anyway, read my review for the first book in The Immortal Beloved Trilogy here.  I gave the book 5 stars and the whole series also deserves a raing of 5 stars or quills in my case. xP

The Alchemy of Forever was read by me on a whim.The story line would have been more intersting to read had it been executed properly.  I did go through the starting chapters with hope the upcoming chapters would be more interseting but I lost interest and kept reading just to say I read it. Which is not good. I didn't like how the main guy/villain was portrayed. I gave it two stars.

Apollyon disappointed me somewhat as it got boring in the middle. The starting and the ending chapters made me give it 4.5 stars. I still think Deity was the best installment in the series. Also, there wasn't that many Seth appearances. Yeah, I am Team Seth. Shoot Me!! Oh, when the blog tour for this book was happening we had to rearrange a password for the secret chapter from Diety in Aiden's POV- the password was well- I was like not everybody loves Aiden. No offense to all the Aiden followers. Still waiting for Sentinel though as this series is still one of my favorites.

Reckless- the third and the final book in the Thoughtless Trilogy was an excuse for filling the shelves. I still think the series should have ended with book 2. This book was just stretched. Whwatver happened in this book was unnecessary. There should have been an epilogue with their marriage and what not. I still think the first book was my favorite in the series. I gave it 3 stars.

Demon Eyes was the book read in the last weeks of April and well I loved this book and also it's predessessor. I did a post about its Favorite Chapters just recently xP I still have to make up my mind of how to go about the new feature. I gave Demon Eyes 5 stars. I really liked it.

The last book that I finished just today was Beautiful Stranger. The second book in The Beautful Series. I am counting this as an April read because I was left with only 10/15 % of the book. Hence,  an April read- as I was almost fully done with the book before April ended. This book was hot. I think I liked the first book more. Some people will disagree with me. Ha!

Well, that's it for my wrap-up for April.

So, I have finished two series- The Immortal Beloved and the Thoughtless Trilogy. \o/

What books did you get to read for April??

Labels: appolyon April Beautiful Stranger Demon Eyes Eternally Yours monthly wrap-ups Reckless The Alchemy of Forever The Deepest Cut This Is What Happy Looks Like