Heyyy, so I read 4 books in September.. Woot. Woot. Attached the screenshot image of the books read.. I will add the full pics later on.. Posting this from fone and it doesn't allow that much freedom.. 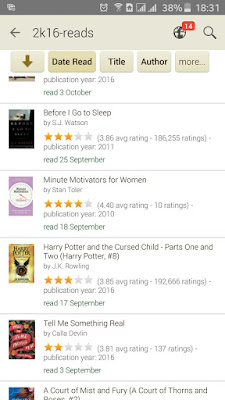 Anyway, so I read Calla Devlin's debut, Tell Me Something Real.. So, it turned out to be different than what I thought it would be.. I gave it two stars..

I also read Harry Potter and the Cursed Child.. Double woot. And well, I still need to vent about this book.. I gave it three stars..

I did read one non fiction motivational book that I liked and it was Minute Motivators for Women. It was short and good. And I gave it three stars..

The last book I read for September was the thriller, Before I Go to Sleep and then saw its film adaptation with Nicole Kidman in it.. Well, I like the movie just a little bit but not really.. The book as well, I found a-okay but I gave it three stars..

So many three star read but I feel so differently about each individually..

Anyway, already done with my first read for October. Haha..

What have guys been up to? What did your September reading look like?

Reviewed Title:
Tell the Wind and the Fire

Labels: 2016 Before I Go to Sleep Harry Potter and the Cursed Child Minute Motivators for Women monthly wrap-ups September Tell Me Something Real