Francine Pascal is the creator of several bestselling series, including Fearless and Sweet Valley High, which was also made into a television series. She has written several novels, including My First Love and Other Disasters, My Mother Was Never a Kid, and Love & Betrayal & Hold the Mayo. She is also the author of Sweet Valley Confidential: Ten Years Later. She lives in New York and the South of France.

I was in middle school when I started reading her books. I haven't read all the books in her Sweet Valley series which is sad. I could only read books that my library provided and they didn't have all her books. I would remedy that by borrowing books from friends.

I loved Jessica and Elizabeth so much and I am so happy now that Francine is releasing another series about them when they are in their thirties. (;

I used to be so into the chracters that I didn't even try to remember the author's name. *sheepish*

I will further embarass nyself by telling you that I used to search Sweet Valley books online after I was allowed to use the internet and I wouldn't know the authors name:(

I wouldn't be able to find the Sweet Valley books even though they weren't available for online reading. I found the author's name only recently when it was announced she was releasing Sweet Valley Confidential's: The Sweet Life. (:

I am sooo excited. Now, it is just going to be a 6-book e-serial. I haven't read the Confidential Series yet. Yeah, I know, I know. I am slow like that.

So, the third book in the The Sweet Life Series is titled Too Many Doubts. Given below is an overview from Barnes and Noble. 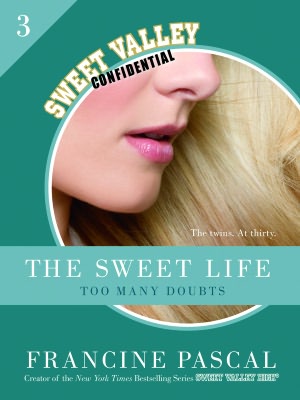 Three years after the events of Sweet Valley Confidential, Elizabeth and Jessica Wakefield are back in Sweet Valley and inseparable once more. But Jessica, now a mother, finds her marriage to Todd in jeopardy after she makes a terrible mistake. Meanwhile, reality TV star extraordinaire Lila Fowler’s fame-seeking scheme backfires in the worst way. And the scandal threatening to tear Elizabeth and Bruce apart only gets worse when the District Attorney gets involved. The Sweet Life #3: Too Many Doubts races to a shocking ending that will leave readers clamoring for more! 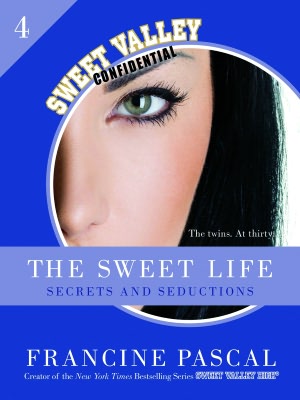 The fourth installment in the series is titled Secrets and Seduction.

Three years after the events of Sweet Valley Confidential, Elizabeth and Jessica Wakefield are back in Sweet Valley and inseparable once more. But Jessica, now a mother, is trying to reconcile a colossal mistake that may have cost her Todd forever. Meanwhile, reality TV star extraordinaire Lila Fowler’s in desperate straits after her fame-seeking scheme has unexpected repercussions. And Elizabeth and Bruce struggle to cope with the fallout of the scandal that’s torn them apart, made worse after Bruce makes a shocking decision. The Sweet Life #4: Secrets and Seductions turns up the heat as the serial speeds towards its explosive conclusion.

The fifth title is Cutting The Ties. 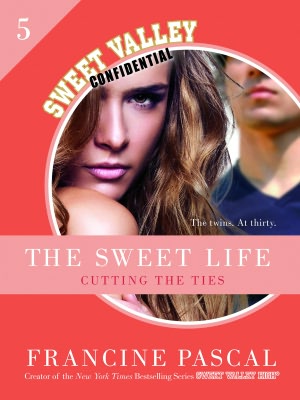 Three years after the events of Sweet Valley Confidential, Elizabeth and Jessica Wakefield are back in Sweet Valley and inseparable once more. But Jessica, still paying for her mistakes with Todd, finds herself at a crossroads in a new relationship. Meanwhile, reality TV star Lila Fowler is facing a life-altering choice. And as Elizabeth fears Bruce is slipping away, she makes a bold decision to act that could change the course of their lives. The Sweet Life: Cutting the Ties will delight, excite and leave readers hungry for the serial’s explosive final installment. 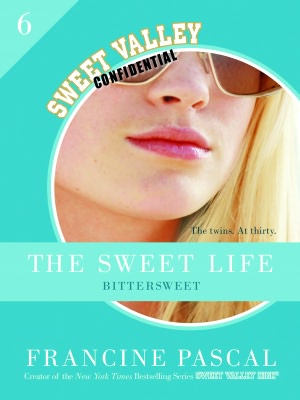 The final installment in the series is titled Bittersweet.

Three years after the events of Sweet Valley Confidential, Elizabeth and Jessica Wakefield are back in Sweet Valley and inseparable once more. But Jessica, now a mother, finds herself in grave danger when a man she trusts betrays her. Lila Fowler’s shocking secret comes to light. Elizabeth learns the dark origins of the scandal that’s ravaged Bruce’s life, but is it too late? Sweet Valley fans, new and old, will be shocked and scandalized by this full-throttle finale!

These books are currently available for pre-order on Amazon, Barnes&Nobles and others.

Did you also read her books when you were young? Have you read all? Will you pick up this series?