I am done reading Onyx- the sequel to Obsidian- the first book in the Lux Series. I have to say I love JLArmentrout. She is an awesome writer. I already follow her Covenant Series and I only recently read Obsidian (and now the sequel) and adored the characters in it.

So, Obsidian starts with Katy having just moved into this new town where she is befriended by a very sweet girl, Dee and her arrogant brother, Daemon, later on.

Daemon keeps giving Katy hard time but then due to certain circumstances the reason behind his behavior is revealed which results in their constant hang-out together. One thing  leads to another and they end up having an alien mojo connection that Katy finds really infuriating. Daemon tells Katy that he liked her before the connection but Katy doesn't budge and says he is only into her now because of the connection. In between, Dee and Katy become best-friends. Katy suffers some humility on the hands of Dee and Daemon's family.

I loved almost everything about this book. The banter between Daemon and Katy was hilarious and full of sexual tension. Katy is a strong, fierce lady who has a passion for books and a blog about her reviews. She knows the risk there are in hanging out with the Blacks but circumstances make it impossible for her to do otherwise. Lesa and Katy's other friends are good additions in the book as well. And Daemon is H.O.T. The idea behind the title of the book is also unique. All in all, it was a very good book with a great story-line that keeps you hooked no matter what.

In Onyx, which released yesterday :p Katy and the rest find themselves in bigger problems. The connection between the two is really infuriating Katy but she also enjoys it. She keeps insisting Daemon only likes her because of the connection even though Daemon apologizes for his past behavior. Daemon showed a very gentle side in this book. He is one swoon-worthy guy. (Ah, I love
him ^_^) Katy wavers after seeing this gentler side of Daemon and wonders if the connection doesn't have anything to do with their actions. but, she pushes him off by hanging out with this new guy in town who befriends her and tells her stuff and helps out with the new abilities she is getting after
Daemon healed her in the last book. Daemon insists that Blake has something fishy about him but Katy doesn't listen as she wants Daemon not to worry about her like a damsel-in-distress. As she hangs out with Blake more she starts avoiding hanging out with Dee and the others which upsets Dee a lot. New revelations are revealed which leave Daemon's world distraught and Katy's life in danger.

This sequel was equally fun and that much more packed with new moving and unexpected moments. The moments between Katy and Daemon had me catching my breath and at times leaving me frustrated. I am still frustrated, I kept thinking about this book after I had read it. I want the next book so bad.

I love the way JLArmentrout used the names of rocks as the titles of her books and the connection
between these two alien species Lux and Arum. Both these rocks are deadly to one or the other species. Having studied Geology, I know a little about rocks and both of these are deadly pretty ehehe.

Some moments I liked. First up, Obsidian:

I hated Daemon Black—if that was even his real name—with a vengeance that equaled the solar power of a thousand suns.

“If she was mine, I'd cherish every inch of her. And I wanted to. Now”


“I always liked you. From the moment you first flipped me off.”

These are from goodreads. I want to post so many more... But I guess this is enough.


I will recommend this series to anyone who is already aware of JLA's awesome works plus those who are alien lovers. Also, those that like to see two people who are so in love with each other but keep denying their feelings (or at-least one of them). 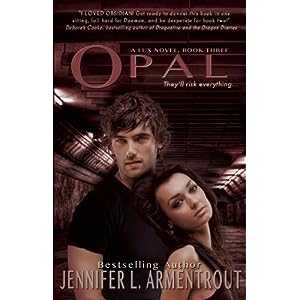 Opal, the third book in the series will be available on Decembeer 11, 2012. I dunno if this is the official cover or not. Goodreads doesn't have one yet. This one is form Amazon.

Are you as excited as I am for the third book? How'd you like Obsidian and Onyx?