Hey, welcome to my tour stop... Under the Spotlight is the third book in Jamieson Brothers novel series. It features the story of the younger brother Garrett Jamieson and how he finds his own happy ending. 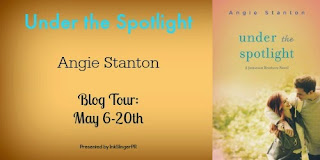 Under the Spotlight Synopsis:

After an embarrassing stint on a reality-TV music competition years ago, Riley vowed never to sing again. Now she's behind the scenes, working at the prestigious Sound Sync recording studio, and life is looking up. But then Garrett Jamieson, the oldest brother in the famous Jamieson brothers band, crashes into her world.

Garrett has hit rock bottom, and he is desperate to reinvent himself. After calling in a few favors, he ends up working at Sound Sync to learn the ropes of record producing from the industry's best. And he can't believe his luck when he discovers that Riley has been keeping a secret—she is an amazing singer. By producing her album, he's sure to top the record charts again. But Garrett is forced to use every trick in his arsenal to persuade the sassy girl to record.

Riley refuses to sing—or even entertain the thought of it—and sparks fly as Garrett finally meets his match. But in the heat of the moment, one stolen kiss changes everything. Will Riley be the first person to finally rein Garrett in, or will Garrett succeed in getting Riley back under the spotlight?

Amazon | Barnes and Noble | Under the Spotlight Goodreads

So, this is the third and final in the The Jamieson Collection series by Angie Stanton and I haven't read the first two books in the trilogy.. :p

This story follows the third brother Garrett's story. Soo, musical books can be pretty interesting and I loved it here as well. Just a little.. :p The relationship between Riley and Garrett was a-okay but I didn't really believe it. And the whole setup didn't really stick with me. :(

The story was quite fast paced and the writing was pretty good as well. It was good that the romance wasn't the main highlight of the book but about the duo making their own way--Overall the book was okay for me.

I think if I had followed the series earlier, my reaction would have been different.

Angie Stanton never planned on writing books—she wanted to be a Rockette. However, growing up in rural America with her brothers’ 4-H pigs as pets, she found that dance didn’t quite work out. Instead, she became an avid daydreamer. After years of perfecting stories in her head, she began to write them down, and the rest is history. When not writing, she loves watching natural disaster movies, going to Broadway musicals, and dipping French fries in chocolate shakes.