Another cover reveal today, you guys. Eeep.
Let's get the drums rolling for the cover of the sequel in The Dante Walker trilogy. 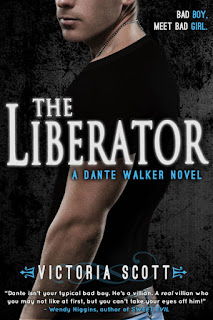 This is the second book in the DANTE WALKER trilogy, and releases September 3, 2013.
Add it to Goodreads
Synopsis:
Bad boy, meet bad girl.
Dante has a shiny new cuff wrapped around his ankle, and he doesn't like that mess one bit. His new accessory comes straight from Big Guy himself and marks the former demon as a liberator. Despite his gritty past and bad boy ways, Dante Walker has been granted a second chance.
When Dante is given his first mission as a liberator to save the soul of seventeen-year-old Aspen, he knows he’s got this. But Aspen reminds him of the rebellious life he used to live and is making it difficult to resist sinful temptations. Though Dante is committed to living clean for his girlfriend Charlie, this dude’s been a playboy for far too long…and old demons die hard.
With Charlie becoming the girl she was never able to be pre-makeover and Aspen showing him how delicious it feels to embrace his inner beast, Dante will have to go somewhere he never thought he’d return to in order to accomplish the impossible: save the girl he’s been assigned to, and keep the girl he loves.