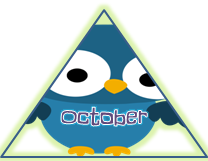 Hey! Happy November. The month of October just swished by. I didn't finish the spooktacular challenge on goodreads by just a book. I had to finish reading Burn Mark but I wasn't feeling it. I gave it a break, read other books, then picked up again. It started gettin ginteresting but by then I only had like two dyas and other things to do, too. So, the challenge end date looming near to me had me rushing through the book with me skipping pages.:-/ *sheepish* Then I made a decision- it ain't deserving to the book to be rushed. It's okay if I don't complete one challenge. Ehehe. Anyway, I will just get into the books I read during the month, then. :p

If I haven't done individual thought posts on these books, they must be done in the weekend fave posts. If the books mentioned haven't been reviewed, fear not- they will be up soon.

The Clockwork Angel by Cassandra Clare. The prequel series to The Mortal Instrument Series. I love TMI Series and I really did like the first book in the prequel series. It explores the lives of the ancestors of the people in TMI. Or rather the famous people mention throughout the TMI series.:p I gave it 4 stars.

Also, Backdraft by the awesome H.M. Ward. I loved this. They are really short stories. It's a trilogy. The first book is titled Collide. Both books are awesome.

Next, I read Queen of the Dead by Stacey Kade. The second book in The Ghost & the Goth Trilogy. I really liked this. They are funny and full of cool ghostly things.. :p I gave it four stars.

Then, Awry by Chelsea Fine. I really liked this sequel to Anew. Ah, Tristan. A solid four stars.

Then, the domineering Destroy Me- a short novella revealing the time span after Adam and Juliette escape. I did a thought post on this in my previous posts. I liked this. A  four star rating.

The Fierce Reads Anthology by various authors. I read four out of the five stories given in this. I did a weekend faves post on this book.

Eve and Adam by Michael Grant and his wife Katherine Applegate. I found this book okay. I have already given my thoughts on this before.

Forget Me Not by Carolee Dean was a new thing for me to read as it was written in verse form. The book  grabbed my attention enough that I read it in one setting. A three star rating.

Beautiful Creatures by Kami Garcia and Maragret Stohl. I freaking adored this book. Five stars. Reading the sequel. Well, it's on a temporary hold.I also read In a Heartbeat by Loretta Ellsworth, Through To You by Emily Hainsworth and Whispers at Moonrise by C.C. Hunter and Witch Eyes by Tracey Scott. The latte two were awesome reads. Loved them.

As the month neared its end I read the final book Body & Soul  in The Ghost & the Goth trilogy and loved it. Then, Saving Face by T.J. Dell was next followed by How To Heal A Broken Heart by Kels Barnholdt. The latter were fine reads.

Right at the end I read the grand Insignia by S.J. Kincaid and an okay story about Zombies titled Zombies Don't Cry by Rusty Fisher. They were for my spooktacular challenge on goodreads. (Witch Eyes and Bosy and Soul was also for that challenge.)

And in between I read other titles in the shapes of Cabel's Story by Lisa McMann, The Vampire Academy Guide by Michelle Rowen and The Secret of Ella and Micha by Jessica Sorenson. :p

Phew, I read less than the books I read last month but I know I am forgetting a few books. Never mind. :p

Now, on to you guys. What books did you read the past month? Have you read any book out of the books I read this past month?

Thanks for stopping by.

P.S. It's my nephew's birthday today and I have mine after two days. Hehe. Happy Birthday to my beloved nephew. :D