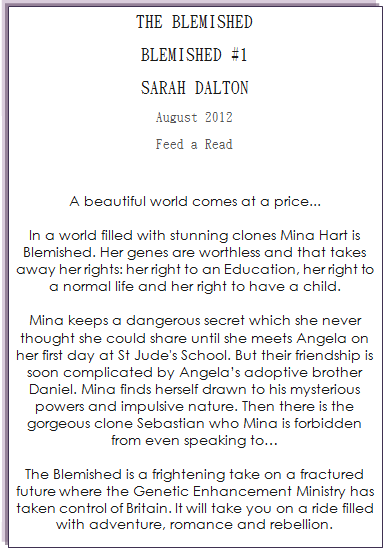 The Blemished by Sarah Dalton was quite an engaging read what with a storyline that focused on genetically modified humans without any imperfections along with humans with imperfections. Our protagonist was what they called The Blemished- these were the individuals that had imperfections- genetic defects. They weren't supposed to show their hair, they couldn't touch the clones- hardly speak to them. Also, the girls at age 15 had to undergo a test so that they couldn't reproduce.

Mina was a 'blemished' but with some special abilities that could get her and her father in major trouble. Mina also had trouble at school in the likes of a clone girl and a teacher who was against the Blemished. Mina had friends in the names of Angela and her adoptive brother, Daniel. She also had a clone friend, Sebastian. Daniel is also special and they click off. I didn't like this aspect of the story. I didn't like Daniel and Sebastian. Sebastian seemed a little off right from the start whereas Daniel, well, I didn't find him intriguing or anything. Mina was a strong female character. She was filled with empathy for her classmates. I liked her for that. Angela was a cool little thing but I felt sorry for her when Daniel was involved.

This book started out really good. But then I got bored. I liked this book just cos of the idea of these clones. Other than that, I foud this book okay. I wasn't moved by the characters that much or the storyline. I didn't get wowed by this book. At times I felt like I just wanted to get done with this book. I was tired of how Mina was about her feelings for Daniel and Sebestian that just made me yawn. But I have to say the dialogues were sometimes funny. >-< And, I felt like this storyline has happened before. Which is well what a dystopian is about. But I just didn't get the 'wow' factor from this book. The mention of 'designer babies' was really cool in this. D:

Other books in the series?

I won't be jumping up to read the next book. :( But I will be reading them!

I got this book for review and I would like to thank the author.
Toodles.
Happy Reading.