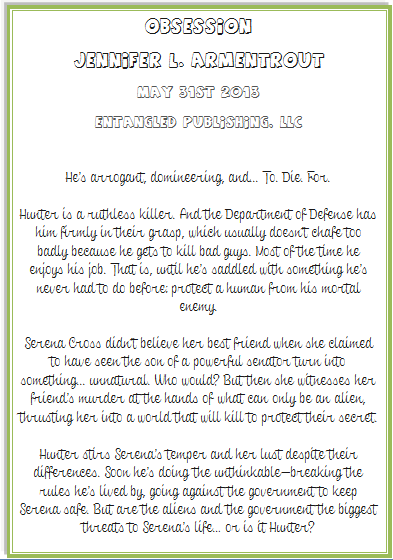 I read Obsession for two reasons. First, it was by JLA. Second, it was based in the Luxen world. And we all know how I have enjoyed the Luxen series. I have reviewed the first two books, Obsidian & Onyx in the Luxen series here. I reviewed the third book, Opal, here. Suffice to say I love the series. These books were introduced in our lives back in 2012 so you can see how thirsty we were for some Luxen world. And this book, Obsession, was a good susbtitute. It was set in the Luxen world as I already said but was told from an Arum's perspective along with our human female protagonist.

This books brought the Arum's into a whole new light. It will make readers wonder who the good guys are. This book was so enjoyable yet so frustrating. Our protagonist, Serena- well, I would love to have a friend like her. I loved how she was in the whole situation. It was so realistic. Her life was turned upside down when she saw her bestfriend get murdered right infront of her eyes by something not human. Add to that she is now being baby-sat by some hot species of alien origin. She can't help but be attracted to him but she must get to the end of all the mystery that surrounds her baby-sitter and also get to the bottom of why the bad guys are after her. Hunter- such a sexy name for a babysitter btw can't believe he has to babysit some human who is hot and bothersome. But he has a job and he must protect even if it is making him question all his beliefs. He will do anything to protect her.

After reading this book one can only wonder that maybe the Arum's and Luxen are actually being played and really the bad guys are someone else and these two have been fighting somebody else's fight. Both sides lost people due to their actions which is a sad thing as a lot of Arum history was revealed in this book. In the Luxen series we saw how Arums had killed- in this book, Luxens were doing the same thing. Its just like how every story has two sides and/or how a coin has two sides. Heheeheh.

The only I can say for this book is that it was awesome. It was such an enjoyable read. I was literally flipping pages to know more of the story. I was just, ah! I fell in love with the characters in this book. I am kinda worried about book 4 of Luxen series Origin which comes out August 27.

Will I recommend this book? Yep.

To finally sign out, here is my GR though right after I had finished this book:

Have you read this book? What did you think of it? Or you have yet to read this and have read the Luxen books? Whatever the case, feel free to lemme know.