I didn't know this was originally a two book deal and I only found that out after reading this instalment so I don't think I actually grasped that this was the last I would be seeing the characters... Like I was all excited for the final book. :p

Anyway, I think I enjoyed Alienated more than Invaded. Firstly, because there were so many few scenes with both Cara and Aelyx in the same room. Secondly, I don't think there were that many chuckle-worthy moments this time around.  It was more serious, moderately whimsical, dangerous-- it was good but I kinda missed that enjoyability factor that I found in Alienated. Read my review for Alienated, here. ;)  Don't get me wrong I still really enjoyed this instalment. As a matter of fact, I loved the dual narrative as obviously they are not on the same planet anymore. So... :D Also, I loved that we got to see more Troy and that sibling connection. (: And more Syrine and her love interest scenes-- which was really sweet as this was the final book. But as I said before I missed Cara and Aelyx.

If we do get the third book that will be cool but for now I am quite satisfied, now that I have finally come to terms with that knowledge. :p I can definitely say this was a very exciting and fun alien duology.

Psst. my GR thoughts before and after finding out about the book deal and before writing this review. 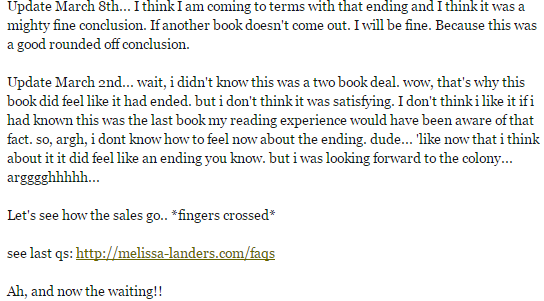 The romantic sequel to Alienated takes long-distance relationships to a new level as Cara and Aelyx long for each other from opposite ends of the universe...until a threat to both their worlds reunites them.


Cara always knew life on planet L’eihr would be an adjustment. With Aelyx, her L’eihr boyfriend, back on Earth, working to mend the broken alliance between their two planets, Cara is left to fend for herself at a new school, surrounded by hostile alien clones. Even the weird dorm pet hates her.
Things look up when Cara is appointed as human representative to a panel preparing for a human colony on L’eihr. A society melding their two cultures is a place where Cara and Aelyx could one day make a life together. But with L’eihr leaders balking at granting even the most basic freedoms, Cara begins to wonder if she could ever be happy on this planet, even with Aelyx by her side.
Meanwhile, on Earth, Aelyx, finds himself thrown into a full-scale PR campaign to improve human-L’eihr relations. Humans don’t know that their very survival depends on this alliance: only Aelyx’s people have the technology to fix the deadly contamination in the global water supply that human governments are hiding. Yet despite their upper hand, the leaders of his world suddenly seem desperate to get humans on their side, and hardly bat an eye at extremists’ multiple attempts on Aelyx’s life.
The Way clearly needs humans’ help . . . but with what? And what will they ask for in return?

(Tryin a new thing with the book info down below. Teheh.)